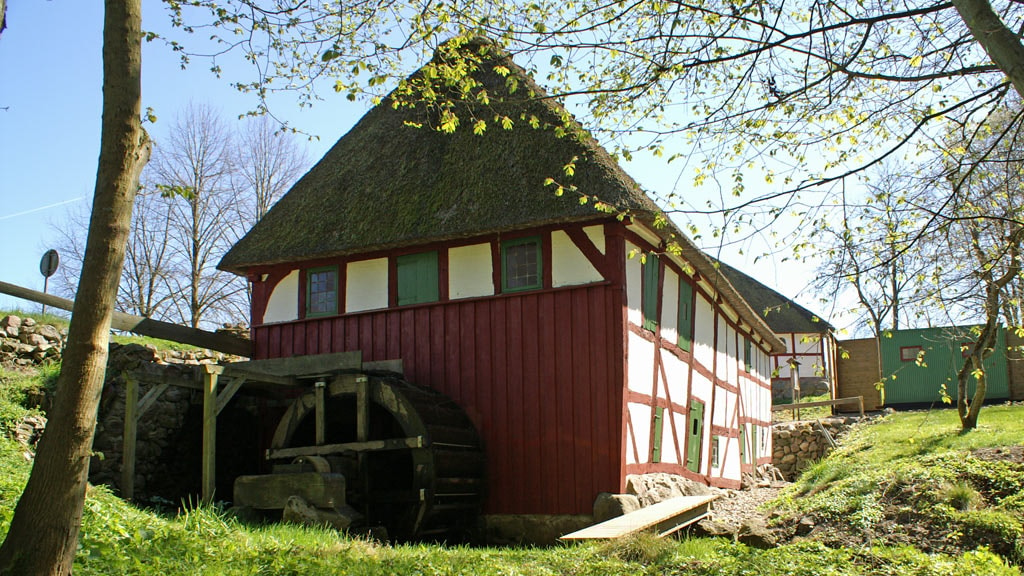 Vibæk Watermill is the last remaining of once 10 watermills at the island of Als. It is fully functional as when the last miller stopped the production in 1938.

The watermill was erected at this site in 1756, though it is the impression that it was moved from Vibøge, since recordings from 1613 mentions a Mads Møller in Vibøge and the Danish last name Møller relates to a miller. On a map from 1649, a mill named Vibæk is placed inland and a test shows that the wood used for the mill was chopped around 1550.

A reed-thatched mill is described in 1715, with remarks of complaints about failing water supply during dry summers. The lack of water and the long distance to the shipping site at Taskland results in a move of the mill to the current site in 1756.

Vibæk is one of the longest and water abounding brooks at the island of Als, but during the 1830´s the water supply decreases further during summertime and in 1835 a windmill is erected above the watermill.

The windmill burns down due to arson fire and only the foundation made by granite boulders remained. Since there are, very few of this type of mill plants left in Denmark the association Vibæk Fonden set everything in on finding another mill of the same dimensions and they were successful in 1995.

Niløse Mill in Dianalund at Zealand is disassembled, moved and re-erected on the foundation at Vibæk in 1996 with financial help from the association Mads Clausen Fonden. The mill had no cap and arms; however, financial support from various associations and supporters made it possible to mount a cap in 2008.

The inside of the windmill is empty apart from the stairs leading to the first floor and the mill is used for exhibitions during activity days. The aim is to present a fully functional windmill in time.

For information on opening hours and dates of activity, see Vibæk Watermill.